The Hobbit - Gandalf the Grey

The Hobbit, I loved the book and was horrified Peter Jackson would ruin it; but alas my fears were unfounded and after the long wait I sat down to enjoy a good movie. I really enjoyed the film and was delighted when I was given the 'Escape from Goblin Town' starter set for christmas. Many years ago I was drawn into the hobby by the Lord of the Rings and looked forward to reigniting my passion for the Strategy Battle Game. It really is a great game system I would recommend to anyone though I must admit it has been years since I have had chance to play.

Moving on the models in the set are very nice and surprisingly well detailed for plastic. They really do capture the spirit of The Hobbit and look great on the tabletop. The scenery is a nice addition that is unfortunately absent from the fantasy and 40k starter sets. The first model I opted to paint was Gandalf for little other reason than I had recently bought some grey paint. 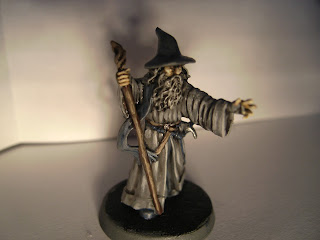 Read more »
Posted by Doombringer at 15:45 No comments:

Email ThisBlogThis!Share to TwitterShare to FacebookShare to Pinterest
Labels: Fantasy, painting, The Hobbit

Here follows briefly a rough outline of my first Blackwing Commanders background and his model. I am yet to base him as I like to base several models at once to save time. Overall I am happy with his paint scheme though the photos have blurred some of the details, I think he sets the tone well for my army of dour and secretive special operations marines fanatically devoted to the Emperor.

Chaplain Anselm of the Rock

Named for an ancient Terran philosopher, Chaplain Anselm is the current chief spiritual advisor of the Blackwing. He was chosen as one of the founding members of the chapter for his loyalty and devotion to the Inner Circle. He is described by those who know him as a generous father figure who enjoys sitting down for deep intellectual discussion over afternoon tea. He is righteous in battle and devout in prayer as any chaplain should be. Anselm is however hiding a secret from his inquisitorial masters.

Slavishly loyal to the Dark Angels he has been carrying out their agendas in the Hellcaris system and ensuring by any means necessary that the Inner Circle's secrets do not come to light. More than one inquisitor has died from a tragic accident in recant years and several low-level prisoners have disappeared in the dead of night. Loose ends need to be tied neatly; a task Anselm is all too ready to carry out.

Unlike many chaplains Anselm does not carry a crozius, for his was stolen by a mysterious Dark Eldar Pirate and Anselm has vowed to take it back. To replace his weapon Anselm went into the chapter forges for ten days and ten nights, emerging with a blood red blade dubbed Gorecleaver whose sole purpose is to slay the one who wronged him. 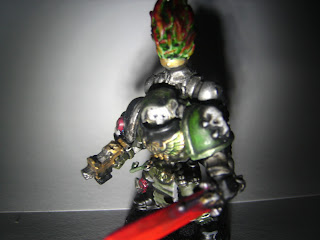 Specialist Games are taking over my life!

So I have managed to survive all my work and have finally burst through into my free week singing and dancing!

With that big monkey off my back it's time to get back to posting some things. With my having a week of nothing to do (it really is feeling pretty good) I thought I'd get round to sorting some of my hobby stuff out. That was when it hit me.

All my stuff is specialist games now.

Read more »
Posted by The Euphemism at 17:25 No comments: