Eisenhorn and Sisters of Silence WIP


The first things I have worked on for my Custodes project are funnily enough not any Adeptus Custodes at all. Instead I have been painting up Eisenhorn, my rendition of Cherubael, and a small warband representing some of the forces available to the Adeptus Astra Telepathica. This is providing me with a great opportunity to play around with the colours and techniques required for my Custodes before I get any of the miniatures. 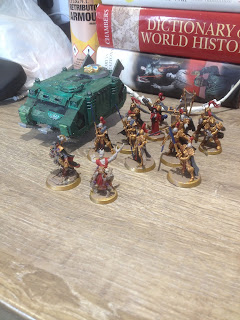 For my Talons of the Emperor I am pretty much just following the techniques from the following videos:
More after the jump:

Read more »
Posted by Doombringer at 19:52 No comments:

Seeing as in I obviously don't have enough projects on the go already, I decided that I would take some time this year re-vamping my old LOTR collection. Looking at my collection I realised just how flat the colours were and how dire in need they were of a highlight or two. I reasoned this to be a good excuse to do some work on them, in particular my Easterlings who I think are the worst offenders and the easiest fixed. I thought to myself that this would be an easy, quick project. That I would be able to do some dry brushing and some shading and then leave them alone.

Once again I have stumbled myself into another big-ish project I hadn't planned on doing. As well as improving paint schemes; I've had some ideas for conversion, basing, and incorporating disparate miniatures into a single force. This is proving to be a fair bit of work thus far, but rather enjoyable and should I get it done in a timely fashion (i.e. this year) I think I might do something similar with my Isengard forces. Below I've collected some pictures of my progress thus far:

Read more »
Posted by Doombringer at 21:19 No comments: