Well I've been very busy this past month, but I did manage to fit in some time to do some painting over one weekend. I've decided when painting my Talons of the Emperor that I'll paint them one squad at a time alongside a hero so as to avoid batch painting. 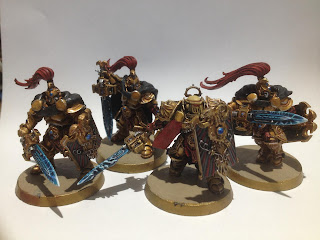 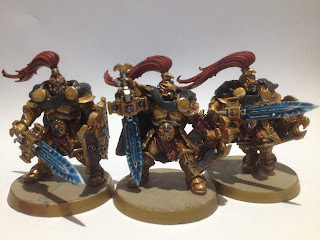 I largely followed the WHTV tutorials for painting these Custodians (as I discussed previously), though I did include some Baharroth Blue when painting their swords between the layers of Temple Guard Blue and the White. They are almost done now, just final touches and tidying up in places to do now. I will base the whole army at the end when I've worked out how I'll achieve the effect I want.

I decided that I really wanted my Custodes to represent the heights of humanity, being the pinnacle of all of old Earth's science and culture, and the Emperor's vision of the future. I'm also at university studying history and wanted an excuse to use my degree. I've elected to use custom transfers of pieces of Renaissance Italian art to add some extra visual interest to my miniatures. Some of the ones I have planned are fairly famous, others are just ones I like. While I've studied Dutch Renaissance art as well, I decided to limit myself to Italy which I'm more familiar with. I tried out a few different pieces of art, but ultimately decided to go with portraits for the Custodians and the centre figures of Michelangelo's Last Judgement for the Shield-Captain. 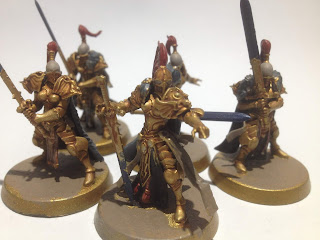 I've also started doing some more work on my Sisters of Silence. I have added portraits to their capes as well (or at least those that aren't fur), and as I noticed that I had used female portraits on my Custodes; I elected to use male portraits on my Silent Sisters. Should I add a HQ choice for my sisters I will add another rendition of Christ and the Virgin Mary to her cloak, though perhaps one of Mary and the Christ-Child rather than another one of the Last Judgement. So the effect will be that these first two squads mirror one another.

Posted by Doombringer at 19:07 No comments:

AoS - At the Court of the Silver King - Prologue


'At the Court of the Silver King' is going to be my first narrative-driven foray into painting and modelling in the Age of Sigmar. At the centre of this shall be my Flesh Eater Courts army, the mad minions of the legendary Silver King himself. I shall also be converting several small war bands representing characters and forces that are travelling to the Silver King's court with myriad interests and intrigues in mind.

As I complete characters and units for this project I shall be posting them on the blog alongside some narrative prose to create a sense of this corner of the mortal realms I am creating. While I cant guarantee a high quality, I hope this will give me the chance to try and improve some creative writing skills as writing is something I enjoy doing and would love to get better at!

I started getting miniatures together for this project when the Flesh Eater Courts battle tome first came out (about two years ago I think) but due to uni and only having sporadic moments of interest in AoS I haven't really gotten much done. With the release of the second edition of Age of Sigmar I have been reinvigorated and I've gathered together all the plans and notes I started compiling two years ago in order to actually start this planned narrative project.

We begin our story on the wind-swept deck of The Revenger, a ship of Scourge Privateers taking their deadly cargo across the Gloom Sea... Read more »
Posted by Doombringer at 23:23 No comments: