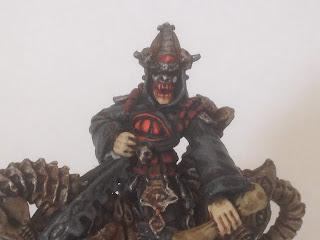 As I mentioned in a previous post, I managed to pick up this old Citadel miniature of the Mouth of Sauron off of eBay which I thought looked pretty cool. He didn't take particularly long to paint up as he is a fairly simple sculpt, but I had an absolute blast doing it. It's got me really excited to start getting into some more miniatures from Middle-Earth! 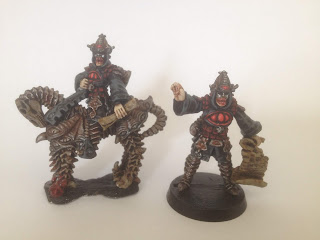 I painted him in fairly muted colours (similar to my Mordor stuff), except for the eyes upon his chest and his helmet to provide both a striking spot colour and to remind his underlings that he speaks with the conviction of the Dark Lord himself. I was surprised to find that the sculpt was of decent quality for its age, though the eye patterning on the fringes of his robes and the bridle of his horse were not particularly well defined so I struggled to do my best at picking them out. There was also text sculpted onto the scroll of the dismounted Mouth, but the detail wasn't great and got lost under a few layers of paint, which allowed me to just write over it. I must also admit I was surprised at how big he is. I was expecting him to be of a weird, smaller scale due to being an older miniature but in reality he seems to more or less at the same scale as modern LOTR miniatures. On foot he does appear about the same height as GW's Black Numenorians, so just a bit taller than most men, fitting as the Mouth of Sauron is believed to hail from that race. 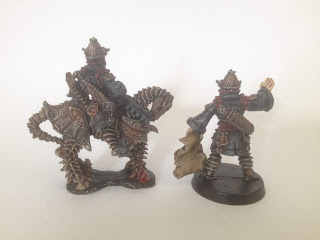 As I already have a Mouth of Sauron miniature, I like to think of this guy as another, similar emissary of the Dark Lord. In the books at the Council of Elrond, the dwarves reveal that an emissary from Mordor offered them a ring of power in exchange for the location of Bilbo Baggins, and while I think this may have been an early allusion to the Mouth of Sauron himself, it could have been one of a number of Sauron's mortal thralls whose job it is to travel beyond beyond Mordor bearing the word of the Dark Lord. Whether this might be to deliver terms to Sauron's enemies, or to muster armies like the evil men who owe their fealty to Mordor, I like to think of this guy as one of many emissaries of evil to sally forth from Barad-dur in the third age. Consequently I think that I'll use him in game as the Mouth of Sauron, but as an allied unit in other evil armies rather than in my Mordor army itself; to represent him gathering, threatening, and relaying orders to the other dark powers of Middle-Earth.

Now that he is finished I'm ready and raring to go with my existing Middle-Earth collections. I've taken stock of what I've got and made some plans as to what I'd like to do with it, and I've decided that my first big project will be my 1000 point Isengard force as I don't plan on adding any more miniatures to it. Its as big an army as I think I need and there aren't really any other miniatures in the range I want. I think I'll also potter around with my Moria and Rohan stuff, laying the foundations for expanding those forces several months down the line, so check back on the blog soon for more Middle-Earth miniatures.

Posted by Doombringer at 12:37 No comments:

Email ThisBlogThis!Share to TwitterShare to FacebookShare to Pinterest
Labels: Lord of the Rings, Middle-Earth, painting

At the Court of the Silver King - Chapter III: Shadows of the Chained Star


As Artorian begins to make his way to the city of Gravenport, other forces set their eyes upon the Court of the Silver King... 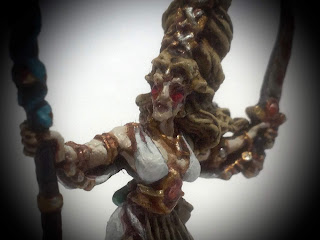 Read more »
Posted by Doombringer at 13:00 No comments:

Email ThisBlogThis!Share to TwitterShare to FacebookShare to Pinterest
Labels: Age of Sigmar, At the Court of the Silver King


I'm rather excited about GW supporting Lord of the Rings again! It was the game that first got me into the hobby and I'm really looking forward to jumping back in. The lacklustre (and overly expensive) Hobbit releases just didn't do it for me, but the promise of new Lord of the Rings releases has me wanting to gather together my old miniatures and make something of them. As I mentioned earlier in the year, I've decided to work on my LOTR stuff and I think I may see about doing some expanding of my collection as well. 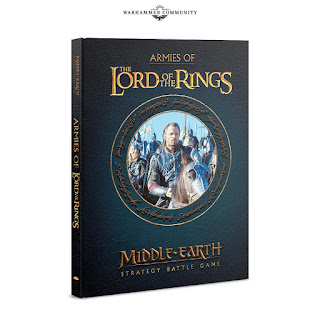 I currently have three forces: Isengard, Eastern Kingdoms (Easterlings and Khand), and Harad. These are at about 1000 points each based on the old points costs. I also think from various spare pieces that I have lying around I could make small (500-750ish points) armies for Rohan, Mordor, Moria, and Angmar as well. At some point I plan on getting the 'Armies of the Lord of the Rings' book so I can work out what armies can take what units (the GW website has a few oddities like Angmar having Wild Wargs listed but not the Wild Warg Chieftain, and Moria vice versa, so I'm not using that as a reliable source of info), then I'm going to work out what armies I can make from various disparate miniatures I have laying around, write up some army lists, and get painting. I'm hoping that each force I put together can be a fun, relatively quick project to put together that will give me an excuse to get some of the miniatures I've always wanted to own, paint something different to my Sigmar and 40k stuff, and just dive right back into a world I love! I've got a lot of ideas (probably too many), and I'm very excited to be getting back into this game.

Funnily enough though, I'm not starting off with a new miniature at all. Instead I'm starting with a LOTR miniature produced by GW back in the 1980's. Citadel briefly had a license for LOTR miniatures back then and I'm afraid to say most of them aren't very good, and some are a little odd like a goatee-wearing Elrond. However, I did think that the 1985 Mouth of Sauron was quite charming in an odd way; looking like every sword & sorcery evil wizard mashed together that has then had an eye motif slapped on top of him. He looks kinda hammy and has a skeletal horse, but I quite like it, and I managed to get him fairly cheap off of eBay. Though I already have a Mouth of Sauron miniature, I just thought this would be a fun side-project to include with my evil forces.

Hopefully I'll soon be visiting my parents, and when I do I'll be able to pick up a force or two to bring back to uni with me so I can get some more progress done on my various LOTR armies. I'll certainly have the time to start indulging in Middle-Earth soon as my Talons of the Emperor are getting closer and closer to being completed. Though LOTR wasn't in my goals for this year (and I doubt its a project I'll wrap up in a year), I am more than happy to put other projects on the back burner, and dive back into a classic game and setting that is very close to my heart. Check back on the blog to see more Middle-Earth goodness soon!

Posted by Doombringer at 13:00 No comments: