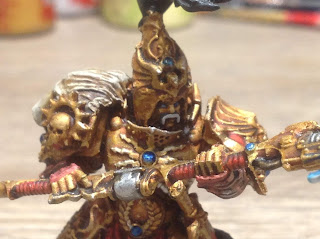 This year I've managed to get some wargaming in nearly every week, and when those games have been 40k I've really enjoyed playing with my Custodes. While relatively simple to play, I've found them very rewarding and have wanted to get into playing some bigger games with them. The release of the Venatari tipped my hand and I've now started pushing towards a 2000 point army of pure Custodes.

Looking at my existing collection, I only really needed to add three more units of three guys to get there. So what I've decided to do is get a unit of Venetari, and a box of five regular Custodian Guard. This box of five has been split into two squads: a squad of three who I've converted into Wardens, and a squad of two basic Custodians (I'm downgrading one of my shield-captains to round this out to a unit of three).

The Venetari are lovely miniatures and as soon as I saw them I knew I'd have to get a set. I do have a soft spot for units with wings and I loved the look of the eagle jet-packs that bore these Custodes aloft. The gun and buckler combination is also something a little different from the rest of the army and that bit of variety is quite nice. I'm quite looking forward to trying them out on the tabletop as well as my current force could do with some more fast-moving units and I don't want to just spam jetbikes. 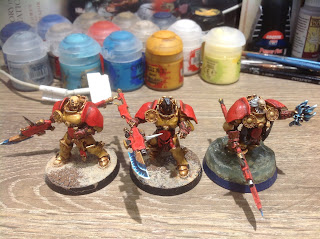 Adding one more squad of basic Custodian guard to my army will let me field a battalion detachment and get a few more precious CP. I decided to downgrade the Shield-Captain I had designed with more stripped back armour and make some more Custodians look like him. I just need to colour-match the two new members of the squad (I need to make their gold a bit whiter) and hopefully they'll look as if they were planned to go together from the beginning. 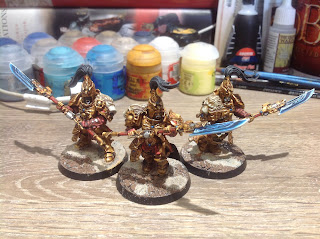 I know Wardens are a way of taking more axes in a Custodes army, but I had these really lovely Guardian Spears left over from the Venetari which I thought would be a waste to squander and thought would make good spears for some Wardens. In order to make them stand out further I added some extras to their armour like a metal skirt over one leg to mimic the robes of the standard Warden miniatures, a lion head on one shoulder, and open-faced helmets which I thought would look suitably unique. 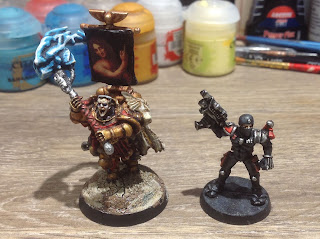 Additionally I'm adding a Custodes-themed Inquisitor and an Imperial Assassin to my Talons of the Emperor force as I had them laying around and thought they might be fun to use in the occasional game. The Assassin in particular I'm excited to try something different with his basing, for while most of my army is ankle-deep in water, I'd like to have him stood on the surface of it to give a subtle ninja-like impression.

I've been working for the past month and a bit on these guys, and hopefully I'll have them finished by the end of May as there's mostly just tidying up to do on them now before basing. After they are done I'm planning on making a return to the Age of Sigmar with a project I'm really excited about and have been planning for nearly a year.

Posted by Doombringer at 16:41 No comments: 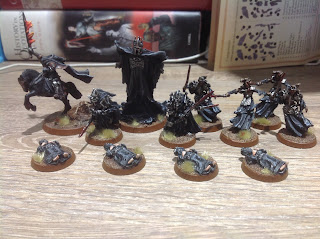 While not an army unto itself, I had these misc. evil miniatures laying around and thought I'd give them a fresh lick of paint. These were quite quick and simple to paint up as they are mostly just dark robes and dingy armour, though I think they convey the mood of these characters quite well. 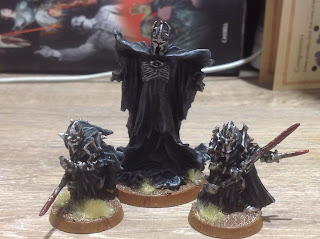 The Necromancer and the Castellans of Dol Guldur are some of my favourite miniatures from the LOTR range due to the incredible detailing on their flowing robes and the cruel menace of their armour. Though I think they are now in the Armies of the Hobbit book, which I don't have so I won't be battling with them, I am very happy to have them in my collection. 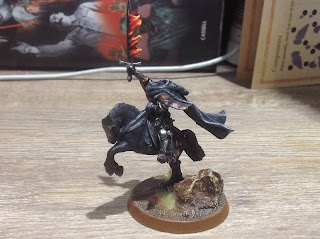 In lore, the Witch-King did not have a fell beast during his rule of Angmar, so I've converted a version of this character on horseback to represent him during that period. I took inspiration from the 'headless horseman' appearance he has in the books, as well as the Ranking/Bass film adaptation of Return of the King. 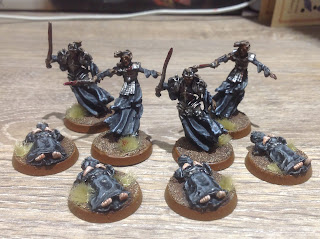 Finally we have some Barrow-Wights whose robes and armour I painted the same as my Nazgul and other evil spirits, and whose skin I painted as if it were mummified flesh. Alongside them I have the four hobbits prepared for sacrifice which I plan on using as objective markers. I really love the Barrow-Wight miniatures and should I ever field an army of Angmar they will be my go-to heroes to lead my hordes of orcs. 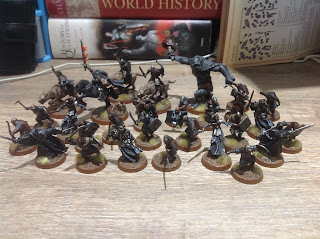 Just to finish off this quick post, here is a collection of my miniatures that would form an ad-hoc Angmar army should I choose to field my Mordor stuff differently. I've no idea if my miniatures will see battle in this manner but it's nice to have the option.

This was just a short and sweet little project I did to keep up the Middle-Earth momentum this year after finishing my Mordor army. Hopefully I'll manage to get around to my next big LOTR project soon, which will be returning to my army of Isengard.

Posted by Doombringer at 14:48 No comments: