Witch Hunters on the Workbench

Things have continued to be hectic these past few months but I have managed to squeeze in some time for painting and modelling. I have principally been working on the miniatures of the Triumvirate of the Imperium box and some of their associated models as well as a few other odds and ends. 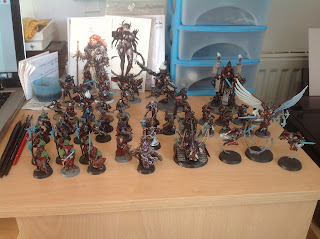 This is my army of Battle Sisters and Ecclesiarchy units as it currently stands. I'm going for a darker and subtly metallic version of the Order of the Bloody Rose colour scheme while trying to capture an element of Blanch-ian grim-darkness that inspired me to begin 40k in the first place. After the summer I shall have to take some better photos of Saint Celestine herself who is currently giving me plenty of grief with her wings which I just can't seem to get quite right.

In the background there are also some Kingdom Death miniatures and their art cards which I am using for reference. I am a big fan of the miniatures produced by Kingdom Death and I wish I had a greater level of skill with which to do them justice. While boutique nightmare horror with all manner of violent and sexual themes is not to everyone's taste (not to mention the issues surrounding pin-up miniatures), they are undoubtedly some of the most technically stunning and amazingly detailed miniatures on the market and I hope to get around to painting more of them. 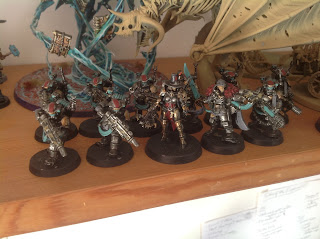 I've also managed to do some work on Inquisitor Greyfax and my Inquisitorial Stormtroopers. I have all of the base colours on and a few highlights though I think there is a way to go with them yet. I really like Greyfax's miniature and I've thoroughly enjoyed painting her thus far. I managed to get some of the old metal Kasrkin minis cheap off of eBay (though they required some new backpacks and a little converting) which I thought would make the perfect bodyguards for her. 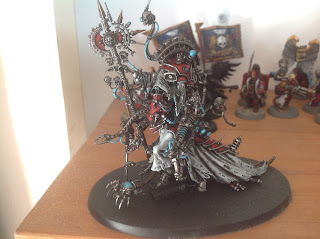 Belisarius Cawl has been a fun miniature to paint thus far even if he doesn't really fit with my Witch Hunters as a single Mechanicus miniature. Rather than going for a traditional red-robed look, I decided to go with scarlet armour plates and monochrome robes I will later adorn with the Mechanicus gear pattern. I have one or two ideas as to what exactly I'd ultimately like to do with him but we shall have to wait and see whether I ever manage to assemble the time or funds for any of my half-baked ideas. 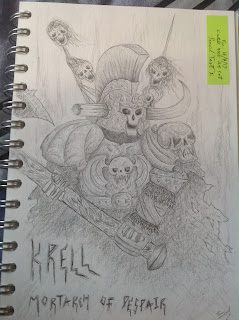 This past month or so has also seen me pick up my pencils again after a lengthy absence from sketching. This was the first thing I doodled to try and get used to a range of different pencils again and its likely that if I do any more hobby-related sketches they will turn up on the blog. 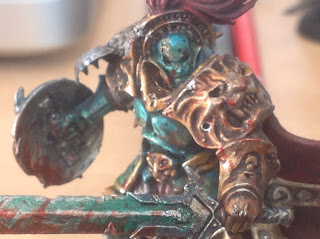 I currently have a bit of free time during which I hope to not only do some more work on my Witch Hunters but also on my Age of Sigmar projects which have been steadily developing in the background. Above is a bit of a teaser for my AoS project which I am currently titling: At the Court of the Silver King, which I am very excited about. I'm also planning on doing something with my guardsmen for Shadow War Armageddon as my brother has already assembled a Chaos Marine war band and is itching to kill anything that isn't wearing power armour. My Menites are sat waiting in the background as are my Tomb Kings which I'm re-painting, not to mention my Dark Angels who are in a sorry state so I think I've got a busy summer ahead of me!

Posted by Doombringer at 10:54 No comments: