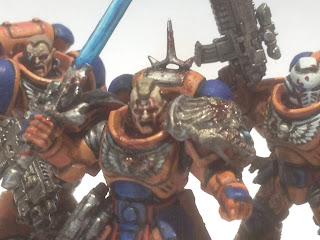 The new Warhammer Conquest part-works subscription thing looks quite interesting. If the armies involved were different and I had more disposable income I'd be somewhat tempted, but instead I just decided to just pick up the first issue because it was only about two pounds and you get three pots of paint and a brush with it which is an absolute steal. I also received a second one as a gift  and was then faced with what to do with the six Primaris Marines that came with the issues that I didn't particularly want. As everyone seems to be raving about the new Kill Team rules, I thought I'd use them to whip up a little team of my own.

These were quite a fun side project to paint up, despite the fact that I usually hate painting Space Marines and hate doing edge highlighting. I decided to paint them in colours that I don't use regularly, just as a way to do something very different from what I usually paint. I elected for blue and orange as they are classic contrasting colours and have never really been predominant colours in any of my projects.

I have written down all the paints I've used on these miniatures just in case I decide to add more to this little band. Its unlikely, but I must admit that there are a few Primaris miniatures I do like. In fact I'd probably say I am quite a big fan of the Primaris miniatures generally (barring the Repulsor Tank). I'm not a fan of their fluff, but I do like their design quite a lot and I like that scale-wise they embody what Marines are meant to be like in the lore.

Basing-wise I really wanted to create a contrast between the bright armour, and the grim realities of war. So the bases were subtly decorated with skulls and bones, over which a liberal amount of typhus corrosion was applied to make it look like the marines were wading through a grungy hell-scape. I then applied some crusty-looking blood to the bases and splashed some on the marines themselves (This was a 1:3 mix of Rhinox Hide:Blood for the Blood God), reserving fresher looking blood for any injuries the marines may have sustained themselves.

It took minimal conversion work to disguise the fact that I had two sets of the same three miniatures. For two of the regular marines; I just removed their purity seals, altered their arm placement and added un-helmeted heads pointing to the other side of their helmeted brethren. The second sergeant miniature I did more extensive conversion work so I could use him as a potential leader of my Kill Team seeing as in a 'Commander' expansion is coming out.

I've also quickly put together an Inquisitorial Interrogator and a Servo-skull to use as objective markers or other game pieces. Fluff-wise I think of the Iron-Mongers as Primaris Marines who were requisitioned by the Inquisition to serve as bodyguards and enforcers before they were gifted to a particular chapter. Thus, they've adopted their own unique identity bound to the Inquisition and have been nick-named by other Astartes as the 'Iron Brutes' for their thuggish behaviour and slavish servitude to their Inquisitorial masters.

I've always been interested by the Ordo Astartes, a minor ordo of the Inquisition that oversees the Space Marines. So I've decided that Klaw is a lackey to an Ordo Astartes Inquisitor tasked with ensuring chapters comply with the integration of Primaris marines (especially poignant as most of my regular opponents are likely to be playing Space Marines). I thought he'd make a good objective marker as perhaps he's gotten lost or separated from him Primaris bodyguards, or needs extracting from a situation gone south. Perhaps one day I'll convert his Inquisitorial master, who knows.

This was only a brief distraction from my Custodes which I'm still plugging away at. In fact I was painting these while I converted a golden dreadnaught for my army, doing edge highlights as I was waiting for pieces to dry. I've no idea if I'll ever actually play any Kill Team, but it will be nice to have some ready miniatures for it (even if grossly unoptimised) should I ever have the chance.

Posted by Doombringer at 14:00 No comments:

Last year in late autumn I wrote a bit of a rambling post about current things I was working on as well as reflecting upon my progress over the year in relation to the goals I posted back in February. I've got a few odds and ends I'm working on at the moment, and I've started thinking about next year already, so I thought I'd write another rambling post as autumn comes upon us once again. 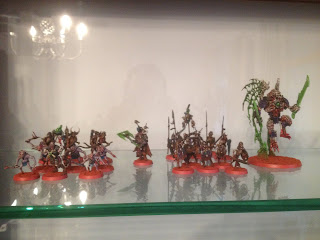 Firstly, something oft referenced but rarely posted about on this blog is what I've been referring to as my 'Lich Warband', or as it now appears to be a 'Lich Army'. I've collected a few different undead armies in my time and I've been left with lots of spare parts. I decided to make a little army out of what spare parts I could, taking the time to experiment with narratives, weird conversions, and unusual paint jobs. Though my time working on this force has been quite sporadic, its been an awful lot of fun and I look forward to properly putting it on the blog when its finished. For now though here's a little look at what I've completed thus far:

Read more »
Posted by Doombringer at 19:24 No comments:

At the Court of the Silver King - Chapter IV: The Fate-Ender


The agents of the Dark Gods also turn their attention to the Court of the Silver King. Seeking to foil the machinations of the God-King Sigmar, Tzeentch calls upon one of his more unusual servants to claim the head of an ancient traitor... 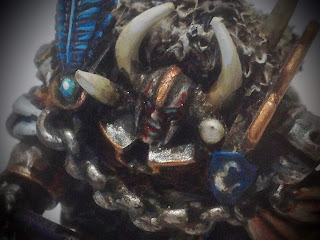 Read more »
Posted by Doombringer at 13:00 No comments:

Email ThisBlogThis!Share to TwitterShare to FacebookShare to Pinterest
Labels: Age of Sigmar, At the Court of the Silver King, Chaos
Newer Posts Older Posts Home
Subscribe to: Posts (Atom)