After a few weeks of hobby inactivity, I've finally had the chance to sit down and finish off my Navigator war band. Though I haven't had the opportunity to use them in any games of Inquisimunda, this was mostly just a chance to try and experiment with a different style, which I've enjoyed doing very much. 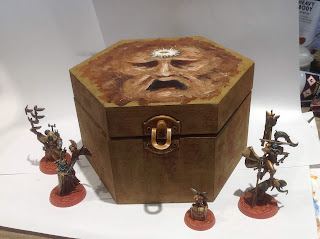 As I've had a lot of fun with my Navigators I decided to make a dedicated, boutique box for them to be carried around in. I've never done something like this before, but I've seen others do it for their Blanche-esque adventures and thought I'd give it a shot. I didn't really have a plan for what I was going to do with this box and I ended up trying out a few different things before eventually ending up with this tortured face rendered roughly in acrylics. Its kinda weird and disturbing, thus fitting in nicely with the war band itself.

As I final addition to my Navigators, I have my Novator. Should I actually play some Inq28 I'll not field him until the final few battles and agree some suitably powerful psychic abilities for him with the GM. In a moment of madness I just had the idea of mounting someone on top of my mutant to make an incredibly bizarre duo, and the precocity of it all really lends itself to the style of some of John Blanche's 40k pieces of towering masses of bio-mechanical insanity.

The contrast of the heavy armour and relatively static pose of the Novator, and the fleshy whirling motion of the Mutant go really well together, setting the Novator apart as a serene master of the battlefield.

I've really enjoyed attempting to emulate (and developing my own version of) John Blanche's distinct style through both conversion-work and paint scheme, and though it didn't end up quite how I imagined it would I am very happy with the results. I don't know when I'll next have the chance to do any of this kind of work again as I've lots of other projects to be working on, but it would be nice trying to do another little grim dark war band some point in the future.

Posted by Doombringer at 15:09 No comments: