Over the course of centuries the Lancarions schemed and stabbed their way from a relatively minor house to one of the great powers of the ark. Setting their sights on a place on the High Council, the Lancarions married into the other great houses before assassinating the heirs of House Fireblade and publicly executing their leaders on fabricated evidence of treason. So impressed was Dreadlord Doombringer that he appointed the head of House Lancarion: Khalzar Lancarion, Lord-General of the Blood Legion; a position he holds to this day. After the black ark Palace of Loathing was gifted to Doombringer by Lady Shadowstalker the Dreadlord chose to award it to House Lancarion for their years of loyal service, something that has greatly disturbed the other houses both Great and Lesser who fear the Lancarions will soon become politically invulnerable. 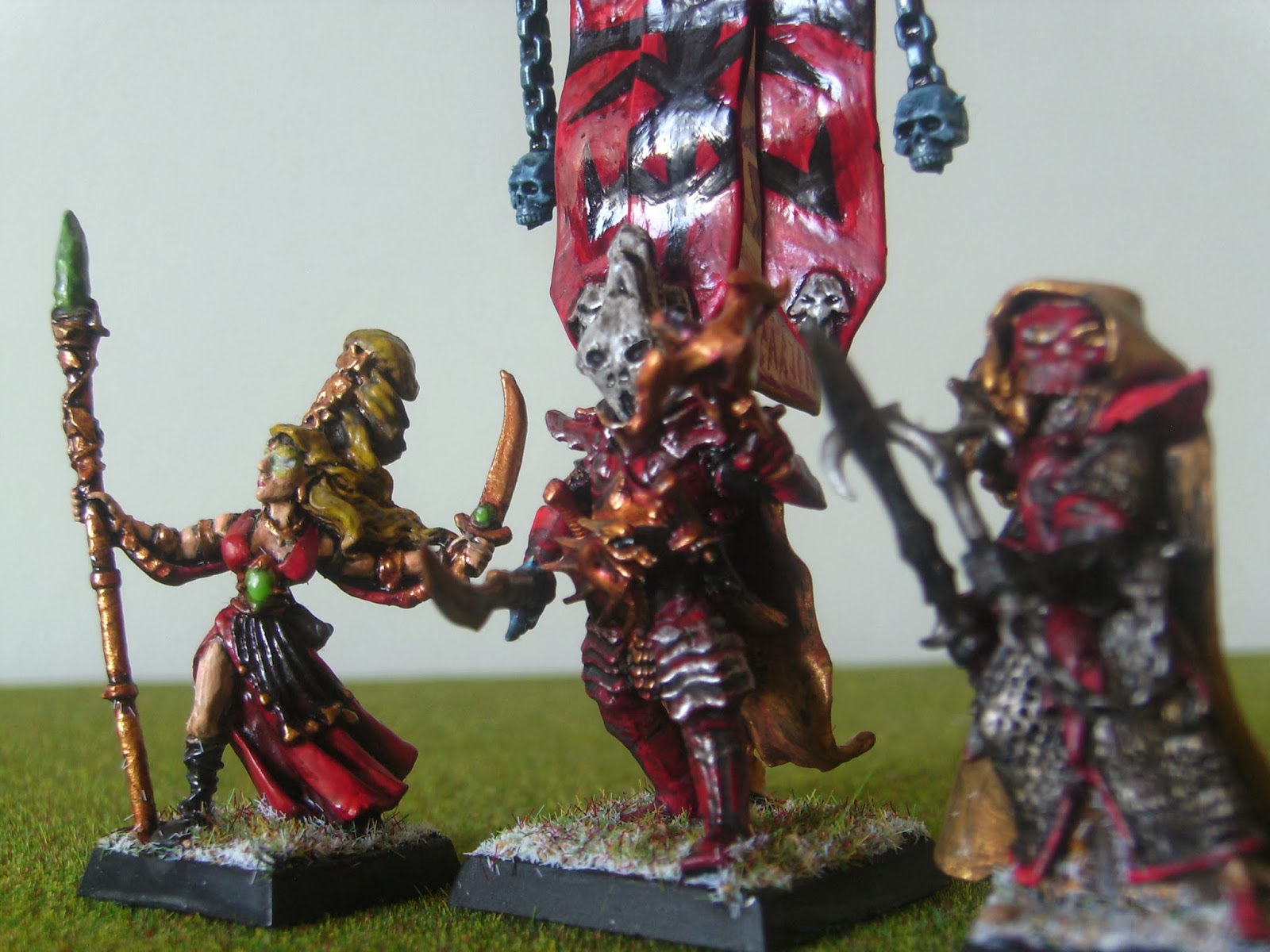 Read more »
Posted by Doombringer at 15:15 No comments:

The Medusa was a fun model to paint and allowed my to try out some of the new technical paints that GW released just before christmas. Her rules however are lacklustre at best and the Bloodwrack Shrine is a rather useless option in comparison to the awesome Cauldron of Blood. The model however is still very nice and surprisingly the first in many years to be produced by GW with a bare breast. 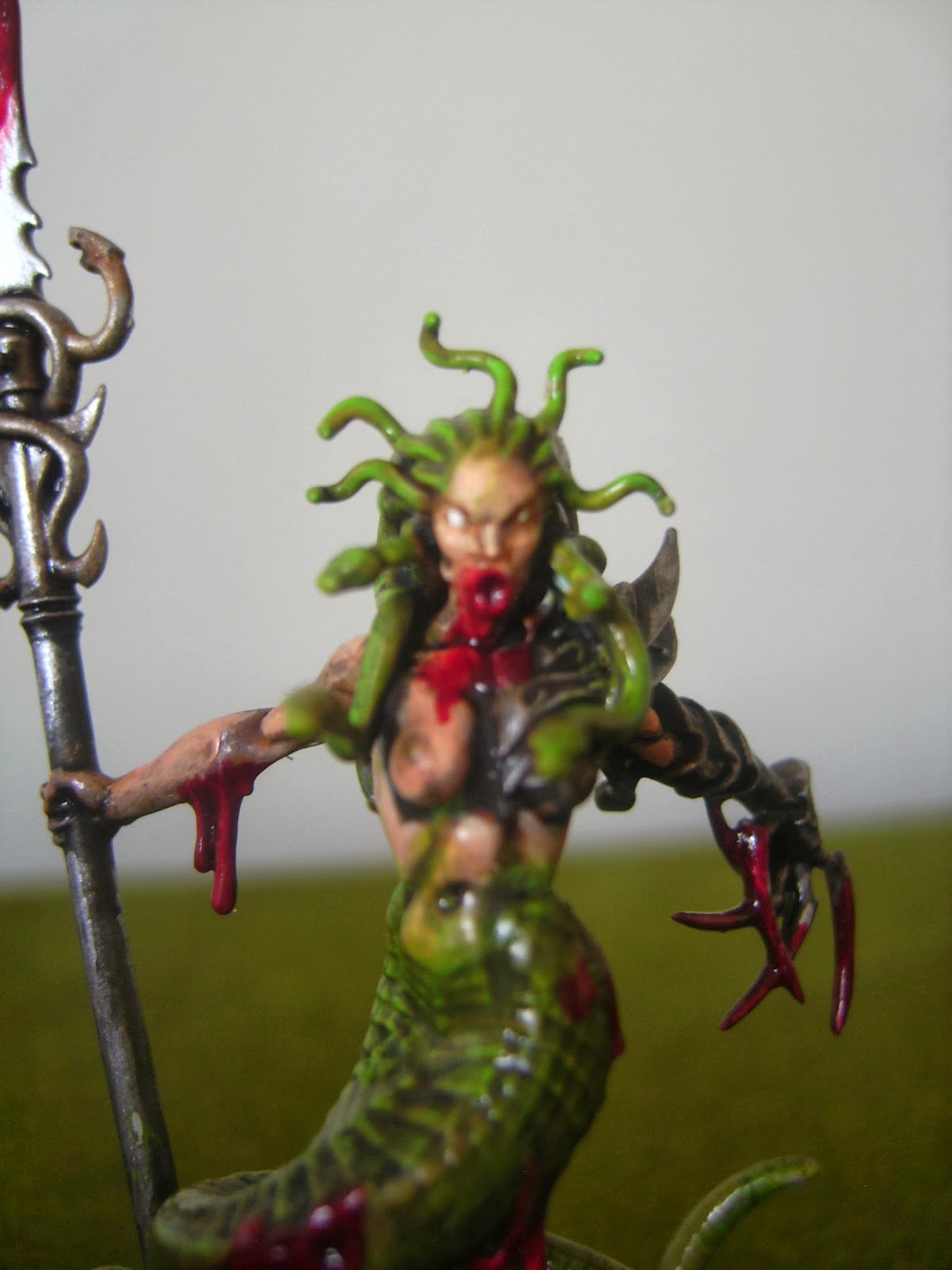 Read more »
Posted by Doombringer at 22:49 No comments:

The Hobbit - Azog the Defiler

There are many changes and additions Peter Jackson has made to The Hobbit when adapting it for his epic fantasy trilogy; one of which is the inclusion of Azog as the main orc villain despite his death many years before the events of the book. His death has been changed to only a maiming and he rides out once again to inflict woe upon the race of Dwarves. I actually like his presence in the story despite it being such a massive departure from the book. I am a self-admitted Tolkien purist but I realise that Azog is necessary in pacing and thematic terms in order for the films to work. Of course his role could have been filled by someone like Bolg but that is a thought for another time.

I really enjoyed painting Azog though his scars were fiendishly difficult to paint, particularly when the model does not have them deeply sculpted on. I ended up painting them darker than in the film but I am overall happy with the final result. 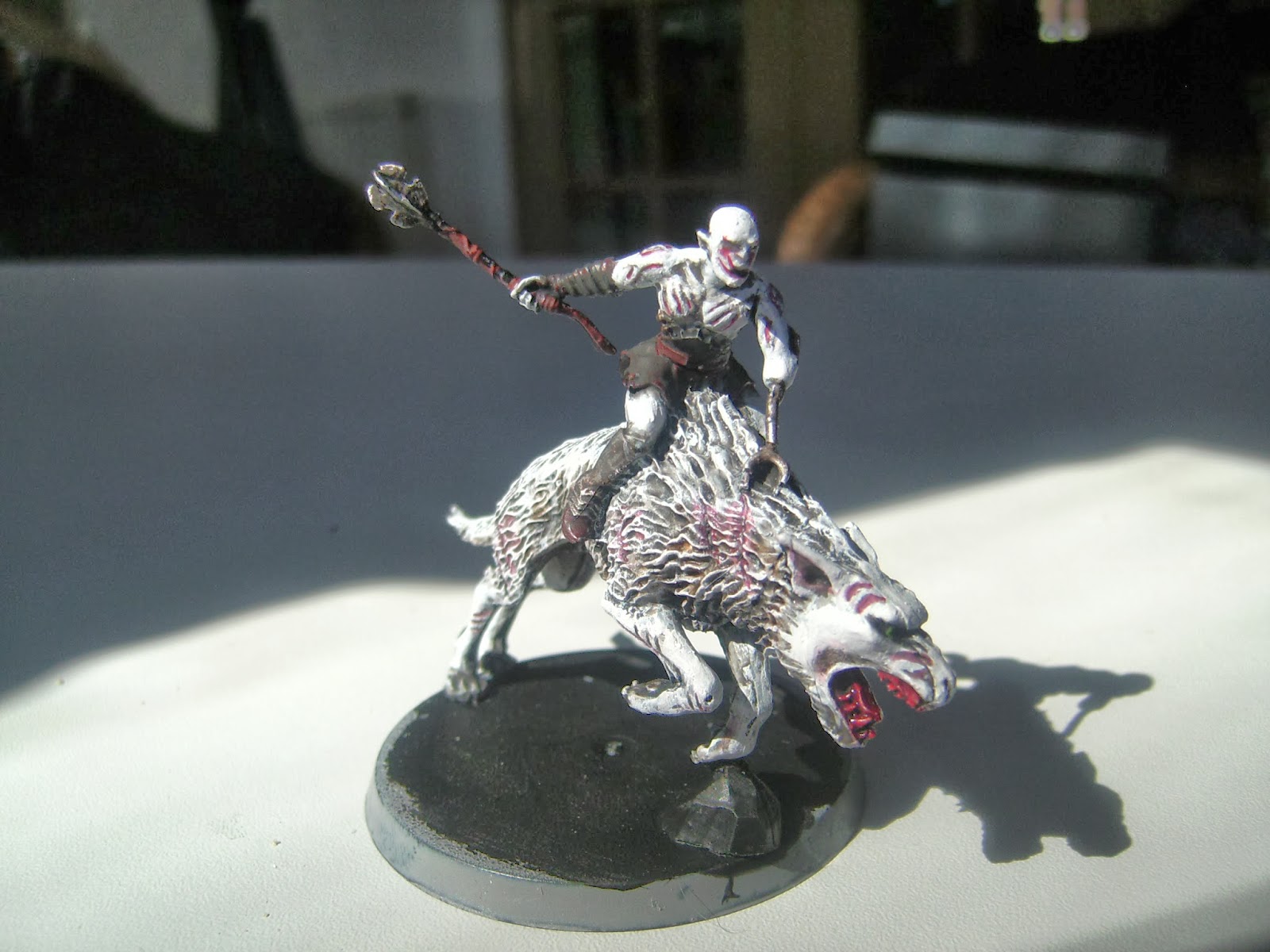 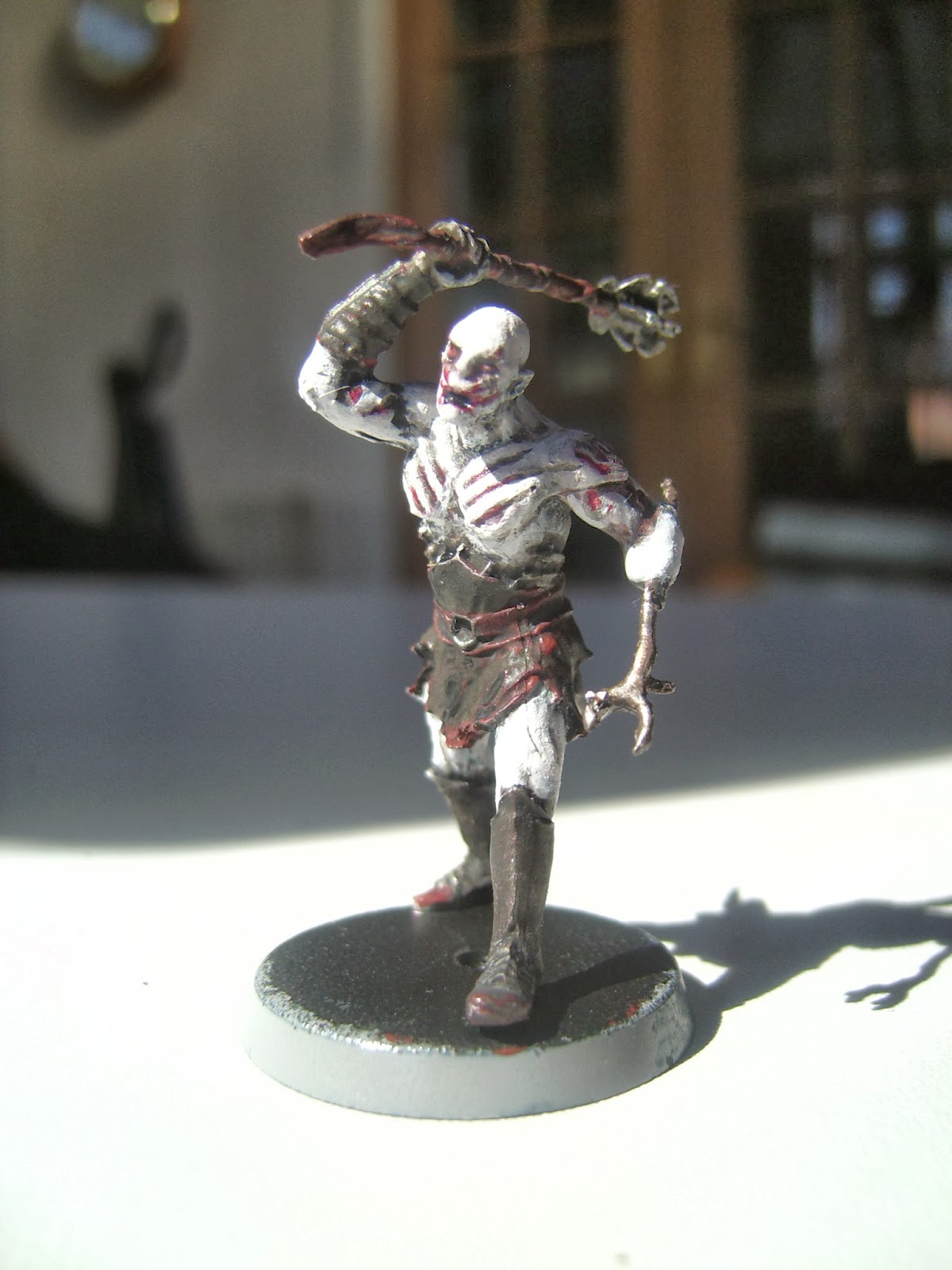 Read more »
Posted by Doombringer at 18:59 No comments:

Email ThisBlogThis!Share to TwitterShare to FacebookShare to Pinterest
Labels: Fantasy, painting, The Hobbit

Dazmir Darkspine is ancient even for an elf, it has been claimed he was one of the first elves created by the Old Ones or even a being from before their time bound in flesh. Whatever the truth he has been a servant of Doombringer for thousands of years, loyal and enigmatic he stalks the darker legends of the Doom Spire and haunts its corridors to this day. As a younger elf he fought alongside his lord against the elves of Ulthuan but was blinded by a Loremaster of Hoeth, barely escaping with his life he vowed to bring ruination upon the mages of the high elves. Using his vast resources and scholarly knowledge he constructed a helmet that allows him to see the winds of magic as well as a suit of armour with accompanying weapons through which he can channel raw power. He now has a sinister reputation for the esoteric and forbidden; the screams rising from the Doom Spire enough to chill the heart of even the fiercest of druchii. 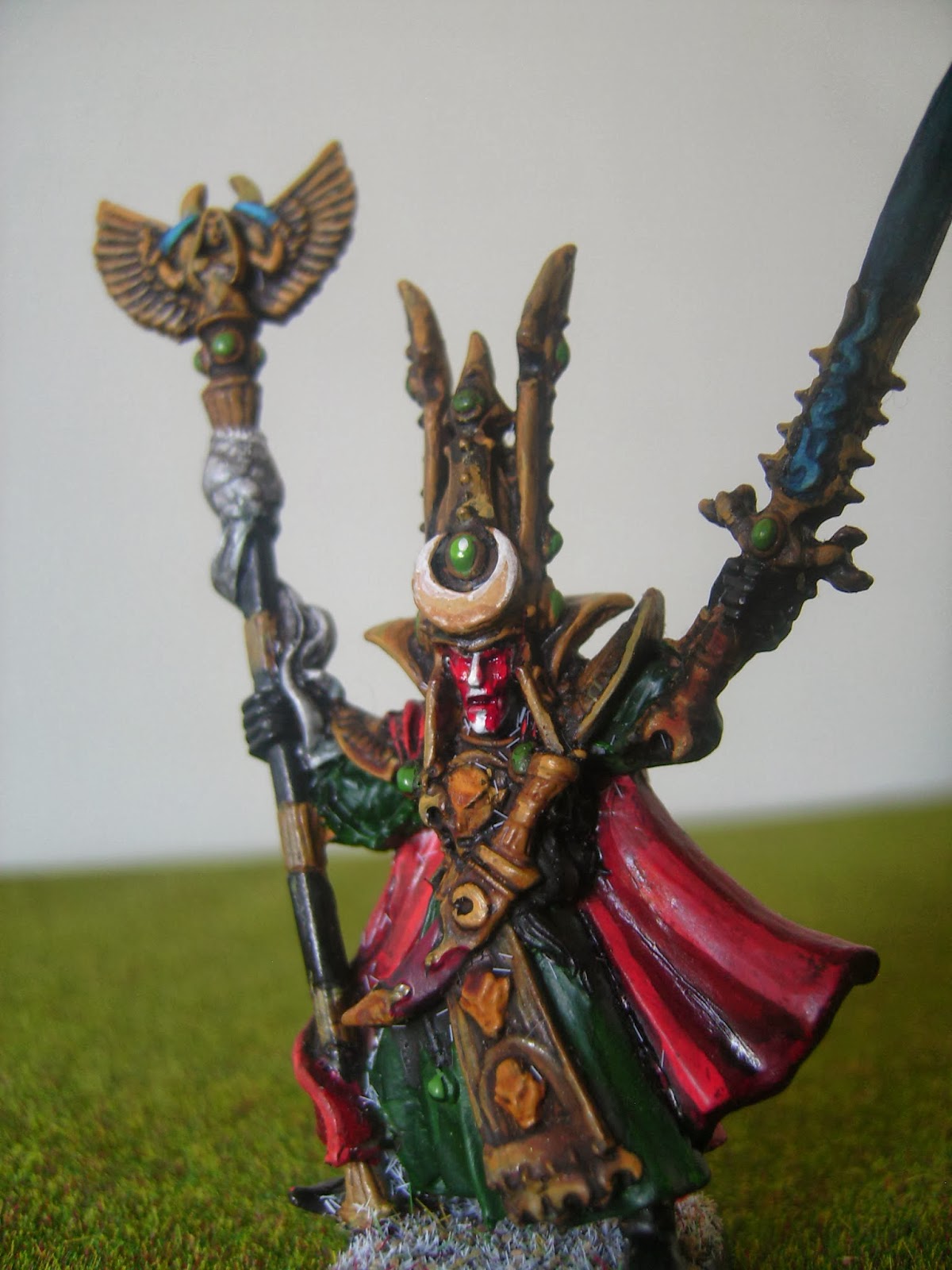 Read more »
Posted by Doombringer at 15:50 No comments: