Doombringer's Dark Elves - The Workbench I

I have finally gotten round to reading the new army book and starting work on my new minis. I must say I do like the new book both stylistically and in terms of content, the full colour treatment has really bought out the sick and twisted nature of the druchii. The models (in my very biased opinion) are absolutely amazing and I would probably buy several of each box were I not restricted by time and money.

This week I have been working on my new Witch Elves and the gloriously evil Cauldron of Blood, as well as thinking about the new rules and force organisation.


Always Strike First as an army wide special rule is fantastic and I think worth losing Eternal Hatred for, most units have Hatred (High Elves) now anyway and Murderous Prowess which I think will only make our units even deadlier on the tabletop.

There has of course been some raising of points values which was inevitable as well as a slight reorganisation of what place some units occupy in the army. Witch Elves are now core and possibly one of the best core options in the game (if you are willing to pay the price for the new models, more on that later) and the rare selection has been filled with lots of new and interesting choices. The War Hydra and the Reaper Bolt Throwers have moved into the special section, as have Harpies and the new Scourgerunner chariot. The special section is beginning to feel very crowded which means greater competition choice-wise, I have a feeling that after a while some special options will never be fielded competitively as they are passed over in favour of more optimised units.

Anyway, onto the models...

Read more »
Posted by Doombringer at 20:21 No comments:

The Brotherhood of the Blackwing Angel; the secretive and mysterious servants of the Hellcarian Inquisitorial Conclave. Rife with internal conflict between Dark Angel loyalists and Inquisitor's lapdogs, they fight in the shadows to fulfil their own secret objectives and establish Hellcarian dominance within the Inquisition.

I won't put much text with this Army Showcase as all of it can be found elsewhere in the blog simply by searching for 'blackwing' or 'dark angels' tags on posts. Apologies in advance for any blurry pics. 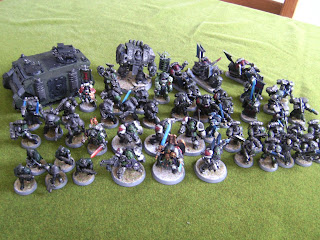 Read more »
Posted by Doombringer at 16:52 No comments:

This year I have endeavoured to finish off all of my ongoing projects, tidy up loose ends and prepare myself for several new projects planned for next year. As usual I have somehow created more projects for myself: The Hobbit, Menoth and the Blackwing. I have successfully finished all of these projects as well as managing to finish off several armies which I have slowly been posting in my Army Showcase series.

This is the last post for my Blackwing I will be doing for the foreseeable future as I have completed the 1500 point army I set out to do. Much as I would like to expand upon this force there are other projects to start and models to paint. Thought the paintjob is fairly simple (perhaps slightly lazy) and the models occasionally mashed together from spare parts; I think I have created a decent fighting force to stand proudly besides my other Imperial armies in so short a time. 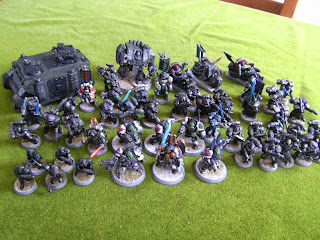 Below is a link to all the individual Blackwing posts and soon I shall be posting an Army Showcase with the army together and some group shots. I hope you have enjoyed this series and I have little doubt a similar one will spring up soon enough when I find another big project to work on.

The Brotherhood of the Blackwing Angel Parts 1-17

Posted by Doombringer at 10:56 No comments:

I keeping with both my themes from the last article and looking at both Forgeworld and Eldar. This time, it's the Hornet.