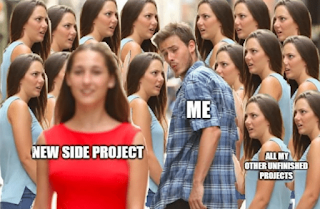 Well I haven't been able to update the blog in a few months due to being very busy, but I have been getting plenty of hobbying done. That is not to say I've actually finished much, as I seem to accrue new side projects at an alarming rate, despite my resolution last year to not start any new projects I've done a rather poor job of that. This year however I am determined to have a year of getting things done, especially given the number of regular opponents I have currently.

One thing I don't usually talk about in my Hobby Review (or on this blog in general) is battling as I don't do that much of it. This year however I've managed to get some games in which I've really enjoyed (for both LOTR and 40k). I have instituted a policy of not battling with an army unless its fully painted and I've found that that has really helped with both painting productivity and also with getting games in as that has become the intended goal of getting stuff painted. Its also just such a great feeling to have a game with a fully-painted army on the board, and while my win/loss ratio isn't too great I've still enjoyed my games a lot!

In particular I've been involved in a 40k campaign with a space marine army that became spun off from the Kill Team I did the other year. While these games have highlighted quite a few of the problems I have with the current 40k meta, I have enjoyed the narrative aspect of it and I've felt really motivated to get an army painted due to there being points available for submitted a newly painted army each week.

In other news, I've also managed to indoctrinate one of my new housemates into the hobby via AoS, gotten one of my regular Warhammer opponents into Malifaux, and I even managed to get my girlfriend into painting Harry Potter miniatures with me!

- LOTR Projects - With the revamping of the Middle-Earth Strategy Game I have decided to do a mass re-painting of my LOTR armies while adding one or two miniatures I've always wanted. My first project of the year to be completed was my Mordor army, shortly followed by my Dark Spirits of Middle Earth which allowed me to field my Mordor army as an Angmar one.

- Malifaux - To finish off my Lady Justice crew I painted up some Domodore dos Cadaveres. I absolutely love the miniatures and look forward to trying them out, as well as getting some games in this year, which I didn't quite manage last year.

- Navigators - as a brief foray into the world of Inq28 and Blachitsu, I made this Navigator war band which I'm really happy with as an experiment into a way of modelling and painting I haven't really tried much before. I don't know when I'll next have the chance to do a Inq28 war band but its something I'd love to do again. 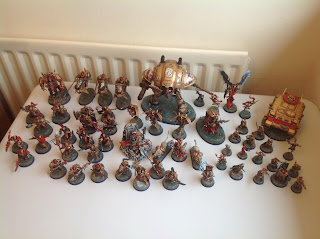 - Custodes Wave 2 - You know how I said last year that I wouldn't start any new projects? Well I did... With the release of the Vetenari, and the fact I've gotten into battling and have wanted to play larger games, I decided to add to my Adeptus Custodes to take it up to 2000 points of pure gold.

- Imperial Knight - An unexpected addition to my Talons of the Emperor, but when one of my friends was selling his Knight I felt I couldn't pass up the opportunity, and what better colour to paint it than gold? I'll be posting pictures of my knight and my expanded Custodes army on the blog as soon as I manage to upload all my pictures properly.

- Daughters of Khaine - Near the start of the year I sold off my Flesh-Eater Courts due to a lack of interest in them, and began swapping over some of my old Witch Elves onto round bases. I did a little bit of painting and converting for a Daughters of Khaine army, but my summer was mostly dominated by more Custodes and by the time I had got the time to work on my Witches, a new army had come to AoS which grabbed me instantly...

- Ossiarch Bonereapers - When these guys were announced I simply had to get them. Nagash himself has been gathering dust on my shelf for years now and this army, full of constructs and tanky skeletons, gives me the perfect excuse to finally field him. I've put my Daughters of Khaine into storage, bought two Feast of Bones boxes (which I've sold the Ogor halves of), and gotten to work raising an army of Ossiarchs to conquer the mortal realms with. 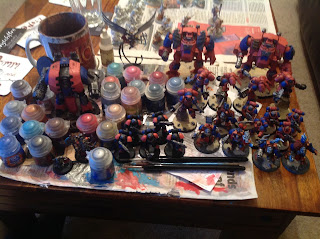 - Iron Brutes Primaris marines - Since September I have been involved in a 40k campaign at my local club. When it came to choosing a faction I was a little at a loss as the campaign began before new Sisters of Battle were released and it started after I had finished painting all my Custodes (the scoring mechanism for the campaign rewarded painting new stuff each week). I decided that as Primaris marines were finally good, easy to paint, and cheap on eBay that I would expand the Kill Team I painted up last year into a full army. By only buying from eBay I've been able to assemble a 2000 point army for only around 100 quid, and I've now painted the majority of it. The campaign doesn't wrap up until February so I haven't painted everything yet, but this is a side project which will complete itself by then.

- Imperial Fists - I acquired a large number of old metal space marines earlier this year which I ultimately plan on turning into an old-school Imperial Fists army for display purposes. I started painting them up but after the new Contrast paints were announced I decided to put them on the back burner until I have the chance to get some yellow contrast paint to do them with as I'm currently unhappy with my own attempts at yellow.

- Lost projects - This year I managed to sell off the last of my Imperial Guard and Dark Angels, as well as my Flesh-Eater Courts which I lost all enthusiasm for after looking at how many miniatures I needed to paint to field a decent list and feeling uninspired by their new Endless Spells. I've also sold off a bunch of misc. Imperial and Undead miniatures I no longer have a need for.

- Witch Hunters - With new Sisters of Battle coming out, I had to make the decision whether to simply add them to my old army or start them as a new project. After seeing the scale of the new plastics I decided on the latter, and resolved to shelve my old Witch Hunters for now. I'll get around to finishing repainting them at some point but we'll see.

- Finish my Space Marines army for the campaign - My first and most important goal is getting my unexpected space marine army finished. I have about half the miniatures finished, and of the half that is left they are half painted so I expect to be done with them in the first few months of the year. After which I can move on to more exciting 40k projects...

- Sisters of Battle - My main 40k project this year (and probably for the next few years) is going to be my Sisters of Battle. I managed to get the limited edition army box which I've supplemented with a converted priest, and the Celestine and Greyfax miniatures I already owned - and given that amount of stuff I think I'll be still painting them for much of the year. 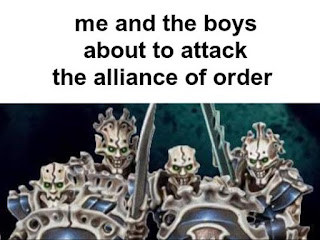 - Ossiarch Bonereapers - My main AoS project which I expect to come to the fore once my space marines are done. I have around 1000 points of Ossiarchs, plus a few other bits and bobs which I was gifted for Christmas, and I hope to get these painted and some games in soon before buying anything else for the army.

- Lucius crew for Malifaux- In my continued Malifaux adventures I've finally decided to get myself a second crew. I went with Lucius as I wanted to stay within the Guild, but have a more interesting experience than the reasonably simple to play Lady Justice. I also just adore the amount of character packed into each and every sculpt in the core box, and I look forward to leading a war band of lawyers into battle. 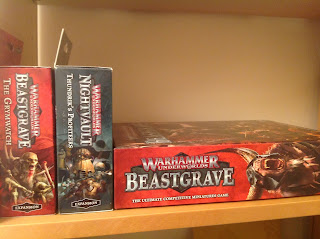 - Underworlds - I acquired the Beastgrave core box this past year as well as one or two other war bands which I've had immense fun playing. However it seems about time for me to actually paint up some of the bands I've been playing with which include: Kurnothi, Beastmen, Kharadron, and Flesh-Eaters. One a month would be a nice goal (especially as I've banned myself from buying any more until I've painted some) but we shall see given everything else I'm working on.

- LOTR - I'm slowly working on revamping my LOTR collection since the relaunch of the game and I hope to continue assembling my forces into this new year. I had a lot of fun doing my Mordor stuff last year and hope to work on Isengard this year, with a particular focus on Dunland considering they got some new miniatures recently.


I go into this year with an awful lot of projects and things I want to work on. GW did a great job last year of releasing things I really, really wanted and I can only hope that they slow down this year. However I am optimistic that I can get plenty done. I'm doing pretty well with my work/life balance at the moment and have a fair amount of spare time to get painting and battling done in. I'm also going to try Instagram this year for posting WIP hobby projects. You can find me at @thecrimsonentityminiatures where I'll start posting soon. I've got a very busy year ahead of me this year so I don't know how my blogging will go, but I'm hoping that the greater immediacy of Instagram will help me get my miniatures out there.